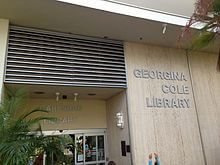 The City of Carlsbad has been planning renovations for the aging Dove and Cole Libraries for quite a while. Last August, the city council allocated $3 million in grant funding towards the project. Now, it looks like there are finally dates set for the improvements – Georgina Cole Library will be closed for construction from September until January, followed by Dove Library from January until May.

What's Coming for the Libraries?

In total, the city is getting ready to spend $11.6 million for renovations to both of the libraries. Major improvements planned include the addition of flexible space, numerous technological upgrades, and regularly-needed general maintenance. Additionally, the Cole Library, which is nearly fifty years old, will be receiving a new elevator and other changes to improve its ADA accessibility.

The Friends of the Library, a nonprofit organization dedicated to promoting library programs, will also be opening a permanent bookstore within the newly redesigned Cole Library.

The Schulman Auditorium, a popular venue at the Dove Library, will be getting plenty of improvements of its own. Some of the biggest planned changes include raising the stage from its current height of seven inches up to a visibility-increasing twenty-seven inches, as well as replacing the current blend tof analog and digital technology with a completely digital system.

Another addition planned for the libraries is a collection of group study rooms which can be reserved for use by anyone, from students to local professionals. According to Jonathan Hartman, an architect with Group 4 Architecture, the San Francisco-based firm handling the redesign, “It's not uncommon to see businessmen conducting meetings in these rooms in other facilities throughout the county.”

At the recent meeting, Library and Cultural Arts Direct Heather Pizzuto told council members, “Modernizing our libraries is going to ensure they remain as relevant, well used and vital to the community as they are today.”

The next step is for city staff to select a construction management firm and general contractor to head up the renovations. Those choices will them be submitted to the Carlsbad City Council for approval in June.

About Dove and Cole Libraries

Bearing the name of Carlsbad's first library director, the Georgina Cole Library was completed in 1967 with an inventory of over 45,000 items. In the late 1990's, area leaders realized that Cole Library wasn't large enough to keep up with the growing demand from the city's increasing population. The Dove Library, officially named the Carlsbad City Library, first opened its doors to residents in 1999 and instantly gained widespread popularity throughout the community. Today, the Dove Library's collection includes more than 200,000 items ranging from books to video games, while the Cole Library is home to around 180,000.