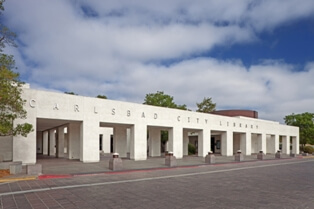 Boasting over 200,000 items in its collection, Carlsbad's Dove Library is a spacious and well-stocked facility offering no shortage of resources and services to local residents. Now, the 64,000-square-foot space, also known as the Carlsbad City Library, has been granted almost $3 million in funding by the Carlsbad City Council to be put towards remodeling efforts.

Since first opening its doors in 1999, Dove Library has enriched the community with its vast collection of books, newspapers, and DVDs, as well as with its 215-seat auditorium that serves as host to play readings, author talks, and concerts. There is also an attached art gallery, public-access computers available for use, and an active children's program.

According to Library and Cultural Arts Director Heather Pizoutto, “The methods of delivering library services in a digital age have dramatically changed, along with the community's expectations for that experience.”

Specifics of the library's planned remodel have not been ironed out yet, but management hopes to transforms to facility into a modern, technologically-enhanced community meeting space.

To achieve this goal, leaders envision creating a community living room environment in the center of the library, completed with comfortable circular couches equipped with charging stations to power phones, tablets, and laptops.

Jonathon Hartman of Group 4 Architecture, the firm handling the redesign, said the aim is to “transform the main hall into being the heart of the library, where the pulse of the activity is palpable.”

In addition to renovations in the main hall, the city's funds may also be put towards replacing the current on-site coffee kiosk with a more functional café offering both beverages and snacks. There are also plans to add more seating and shaded areas to the library's courtyard, creating a place for visitors to eat and drink in a relaxing and scenic outdoor environment while enjoy the amenities the facility has to offer.

The improved outdoor space could be used for private rentals, generating revenue for the library, as well as a place to host receptions for exhibits and events at the property's William D. Cannon Art Gallery.

Plans for the facility's renovations have mostly been well received by city officials and the community. Volunteers with the Carlsbad Friends of the Library voiced concerns that moving the bookstore, currently in the front of the library, could result in less traffic and lost revenue.