(SanDiegoRealEstateBuzz) – Pop quiz: What happens when you buy a home for $5.942 million in 2010, update the bejeezus out of it, then put it back on the market 7 years later? Answer: You get to list it for $11.5 million, sit back and relax, and watch the offers roll in.

At least, that’s what happens when you’re Chelsea Handler. And while the television comedian is known for being hilarious and irreverent, we can tell you right now there’s nothing funny about this Hollywood home. When it comes to first-rate class and all around boss-ness (Is that a word? We’re going with yes), Chelsea’s pad can’t be beat. 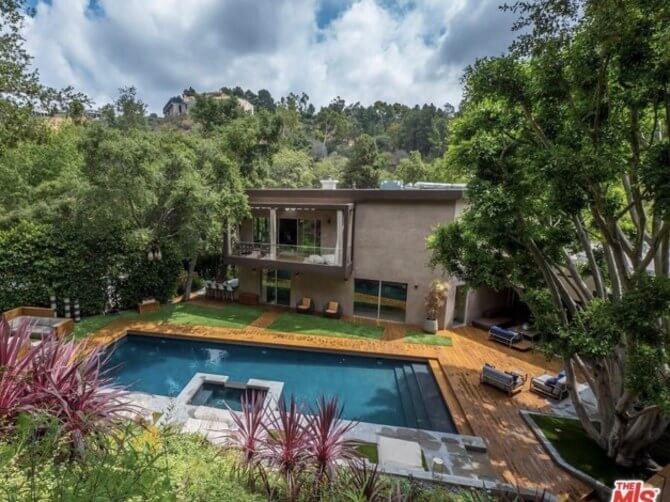 Like so many amazing architectural examples, the whole is more than the sum of its parts. It’s not just the walk-in closet’s epic shoe shelf, capable of housing dozens of pairs of brightly colored heels, that impresses us. It’s not the museum showpiece of a dining room, which looks to seat approximately a billion. (Okay, fine, only 10. But it looks really big.) It’s not even the sweeping view of the Los Angeles hills from the cozy comfort of the dry sauna. 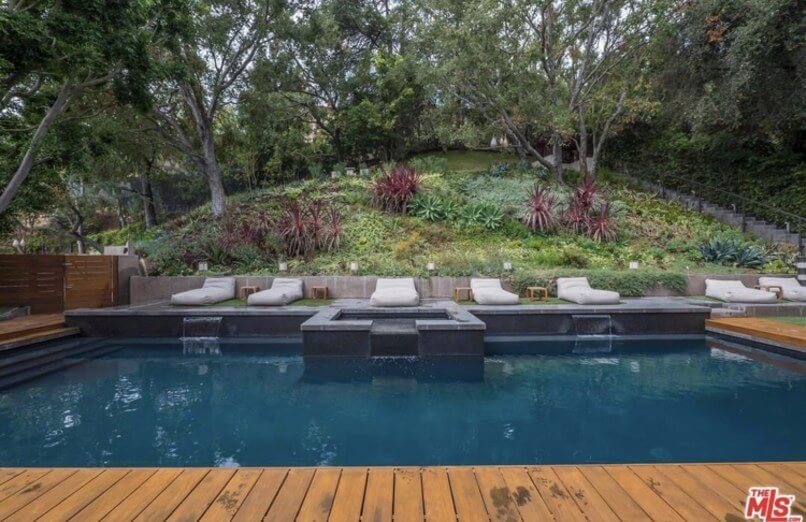 Come to think of it, though, it might be the awe-inspiring, central indoor-outdoor space that does it for this home. Redolent of Mad Men-esque party days, the expansive living-dining area transitions seamlessly onto a covered porch and out into a private yard, completely with glittering pool and outdoor fireplace. The only thing separating the home from all that fresh air is an entire wall of sliding glass doors.

Not that we’d say no to 5,572 square feet or six bedrooms, mind you, or to six and a half baths. Four of the six bedrooms are en suite, with additional amenities include a makeup vanity, two-person soaking tubs and two-person showers. Chelsea converted one of the bedrooms into a home gym (explaining that pencil-skirt physique) and the pool area hosts enough deck chairs to accommodate a Marriott (explaining that California tan). 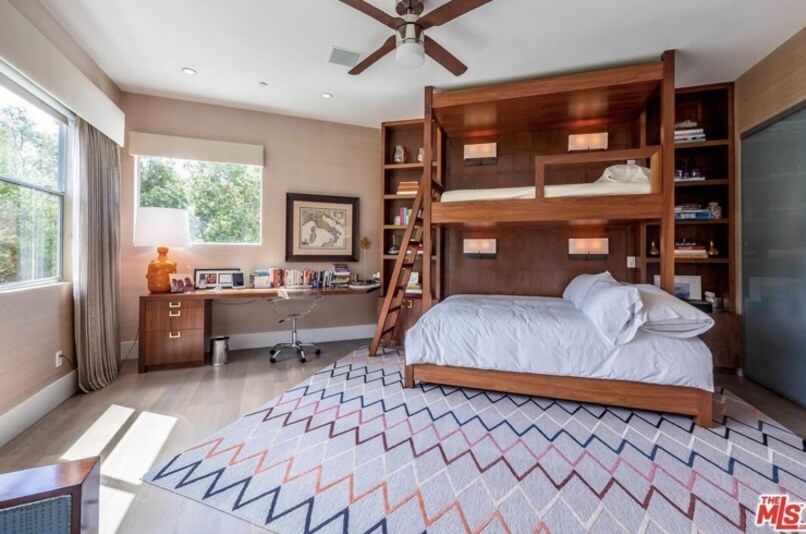 The outdoor space also includes a bar, multiple nook-ish entertainment areas, well-established trees and a spacious deck off a bedroom overlooking the back area. An overhead view shows the property completely locked in by greenery and hills for perfect privacy.

The yacht-like evolution from galley kitchen to dining room to den-inspired living room is also pretty sweet, putting you in mind of a ship’s long, tastefully decorated corridors. The living room boasts plenty of square footage in which to install couches, chairs and a coffee table the size of a four-square court. Chelsea’s revisions have included a drop-down television in the master bedroom, bookshelves flanking the fireplace and a pizza oven.

Because pizza is good anywhere, anytime, with any group of people – and when you’re sitting in millions of dollars of luxury, who wants to order out? At least, that seems to be the thinking behind this coolest of all comedy homes, and we’re buying it. 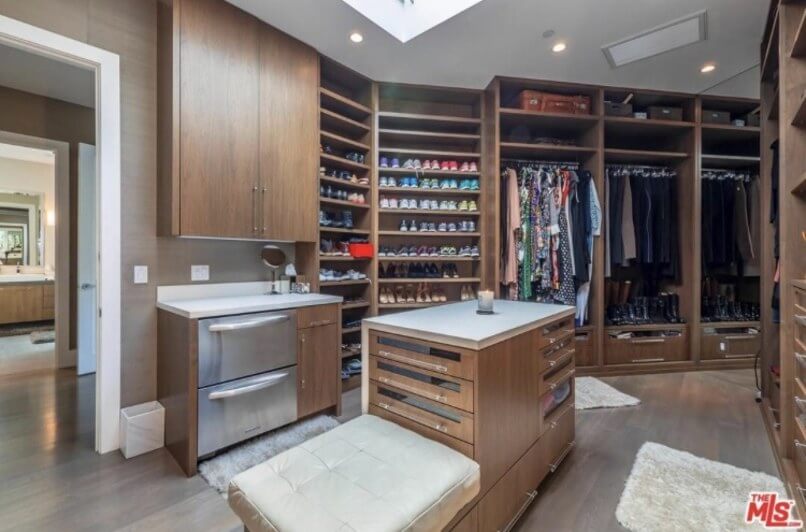 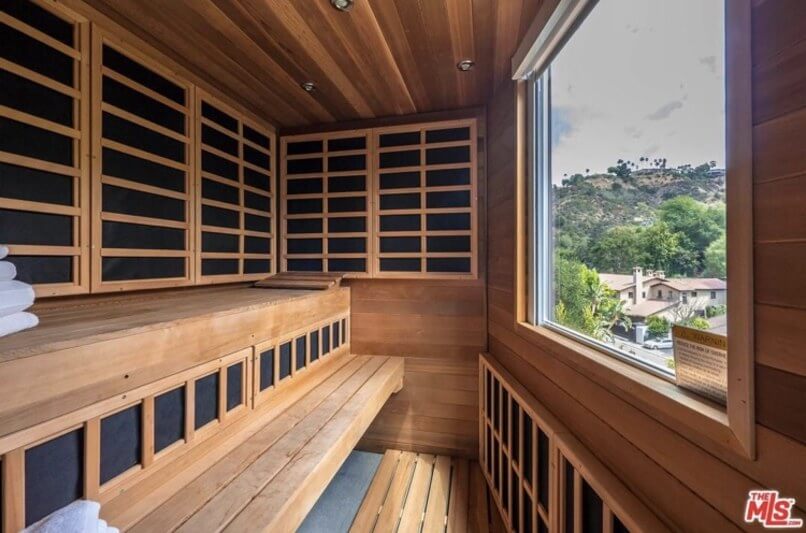 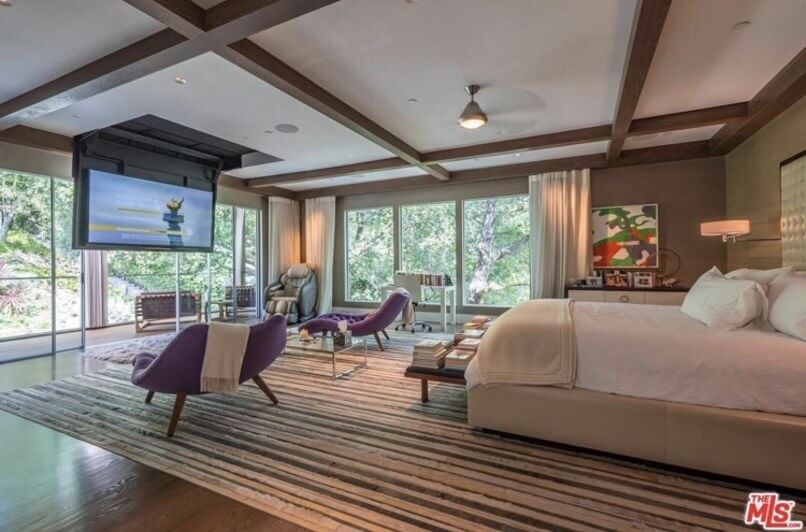 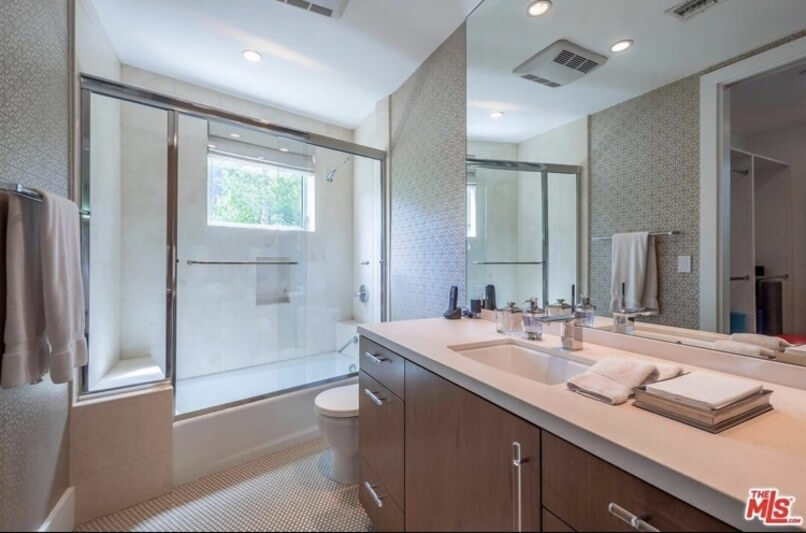 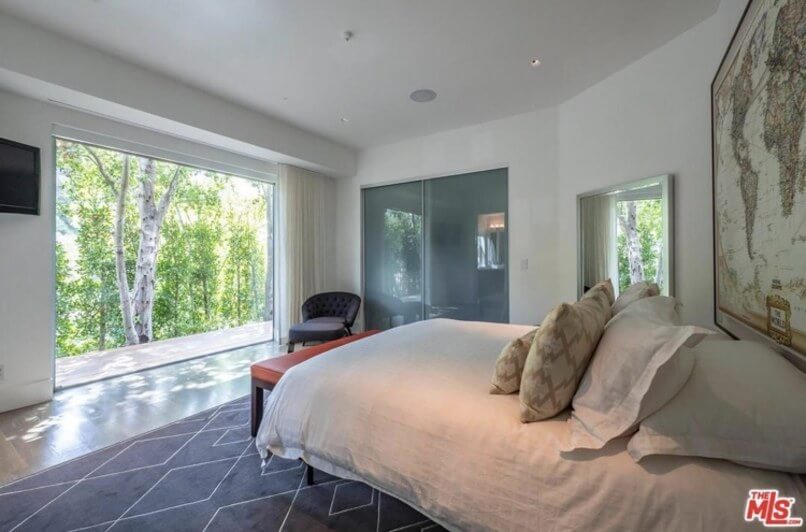 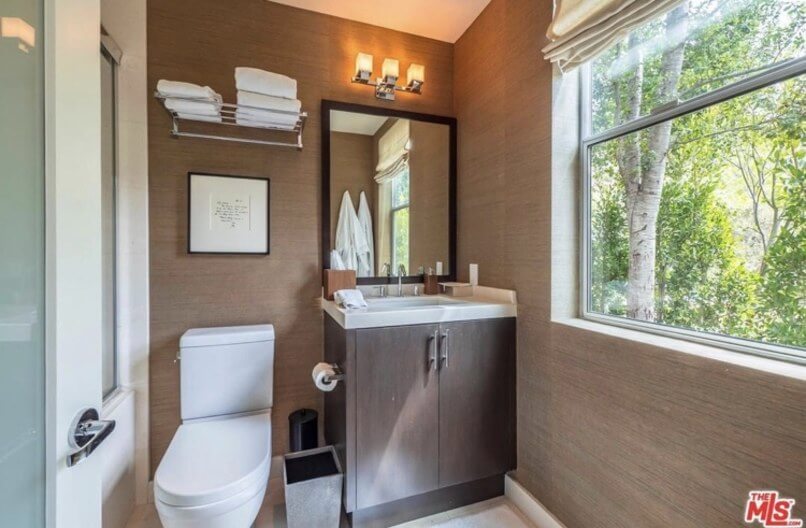 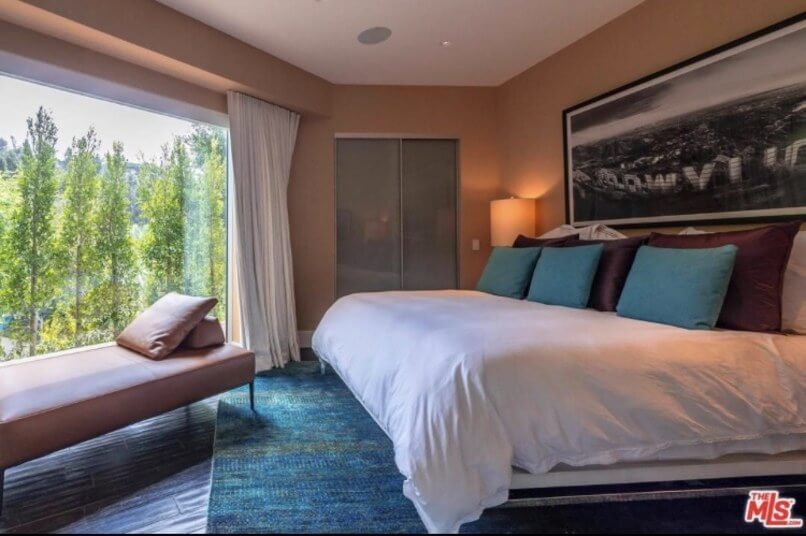 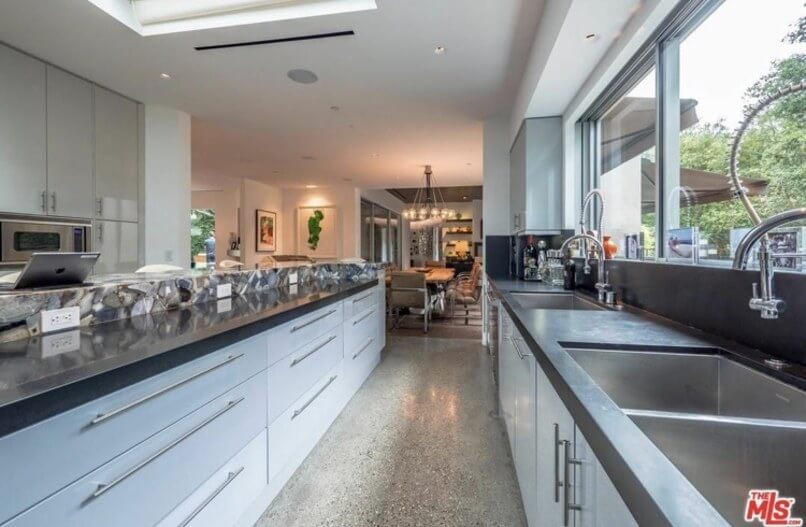 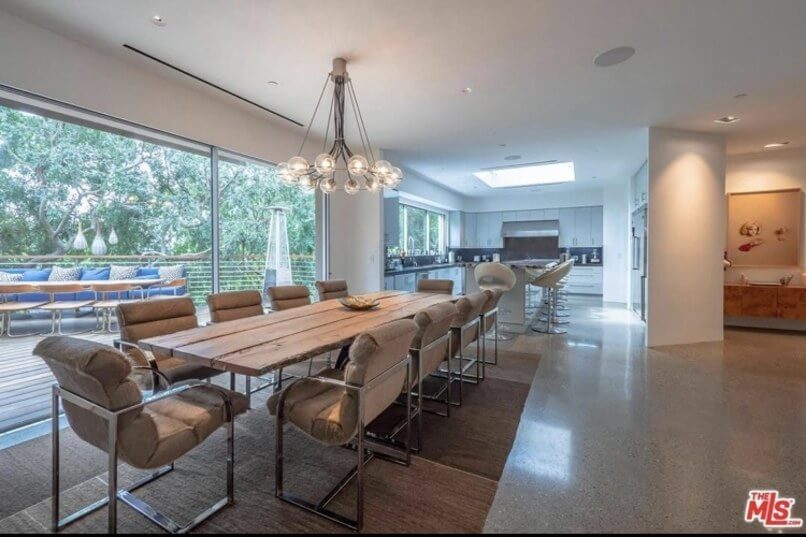 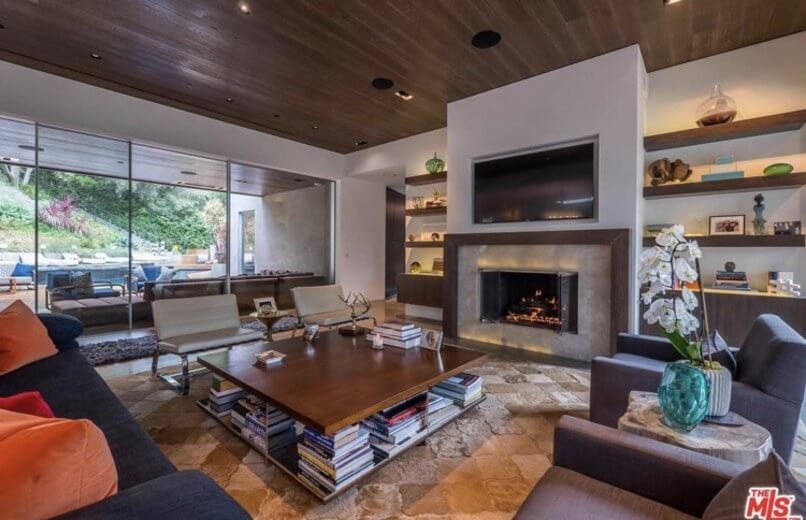 Are you interesting in touring this property? Reach out to a real estate agent!