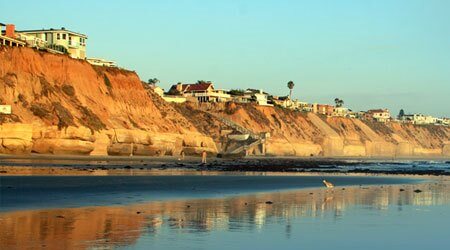 This past Thursday, approval was granted by the California Coastal Commission to proceed ahead with a controversial sand replenishment project set to add thirty-five acres of public beach space to the cities of Encinitas and Solana Beach. The plan, which city officials say would protect sand bluffs from erosion without the need for sea walls and also increase the size of the beach that local residents and visitors can enjoy, has grown criticism from a number of environmental organizations such as the Surfrider Foundation which assert that the project will harm local aquatic ecosystems and bury close-to-shore reefs.

The final step needed in order to begin with the replenishment, which is scheduled to go into action in 2015, is approval of funding by Congress. During the first phase, the city of Solana Beach plans to replenish 700,000 cubic yards of sand from around Tide Park to Via De La Valley, a stretch of beach approximately 7,200 feet long. Encinitas will also be improving a 7,800-foot stretch of their shoreline from West H Street to the 700 block of Neptune Avenue with 340,000 cubic yards of sand. After this initial replenishment, further sand will need to be added to the coastline every five to ten years.

Both Encinitas and Solana Beach have been working with the Army Corps of Engineers to design the beach replenishment plan. With the ACoE's assistance, sand will be dredged from off-shore locations to be used on the beaches.

Despite much hype about the additional beach space and benefits to coastal bluffs, many area residents and organizations are voicing their opposition to the plan. Groups such as the Surfrider Foundation, an activist organization dedicated to protecting and enjoying the ocean, waves and beaches, are adamantly opposing the plan stating that it will bury local reefs and eliminate some of the area's popular natural surfing locations. According to a representative of the Surfrider Foundation, “Surfrider does not want to see surfing resources being traded for towel space.”

Earlier this year, a previously submitted plan for the project was rejected by the California Coastal Commission. The Commission cited the original proposal would have too much of an environmental impact and recommended the cities cut back on the amount of sand they seeking approval to add to the shoreline. The sand replenishment project was resubmitted and given the green-light after the cities brushed a combined 580,000 cubic yards of sand out from their plans.