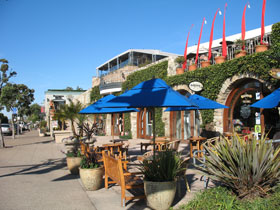 Swaying from their traditional stance of avoiding debt, the Del Mar City Council voted last week to take on a $3 million loan to finance planned sidewalk improvement projects throughout the city. These initiatives are part of the city's overall estimated $4.2 million in planned work focusing on upgrading streets, sidewalks and drainage systems.

Originally, these upgrades had been scheduled to occur over time, with around $300,000 being allocated out of each year's budget.

However, after talks with the San Diego Association of Governments, city leaders agreed upon a financing plan in which they will issue bonds to raise the money needed, and then repay them with the proceeds from the half-cent TransNet sales tax. Those proceeds are estimated to be $200,000 annually.

TransNet is a half-cent sales tax in San Diego County that was initially passed in 1988 and then reapproved by votes in 2004 to be in force until at least 2044. Funds from the tax's collection are used to fund transportation projects throughout the Greater San Diego area.

A previous plan pitched to the city council called for borrowing only $2 million and funding the rest of the sidewalk improvement costs from cash reserves. That idea was scrapped due to other planned city projects, including building a new City Hall, which city leaders decided warranted holding onto their cash-on-hand.

The first portion of the sidewalk improvement project will be along Camino del Mar between 22nd Street and 29th Street. Work is schedule to begin in March and end in May, and will add new sidewalks, curbs and gutters, pedestrian ramps, attractive planting areas and pavement rehabilitation.

Government staff has begun meeting with a number of property owners along the path of the improvement who will be impacted by the project. This comes as a result of property enhancements that have been made within the public right-of-way. Del Mar's City Manager, Scott Huth, has offered to have his team meet on-location with any property owners concerned about how this project will affect them.

Other scheduled sidewalk improvements funded by the $3 million loan include Camino Del Mar throughout downtown, and along Jimmy Durante Boulevard on the southbound side of the road. According to Huth, construction could begin in these areas starting in November 2014.

On the list of additionally planned improvements which have not yet been funded are another stretch of Camino Del Mar from Ninth Street to Carmel Valley Road, Via de la Valle and the northbound side of Jimmy Durante Blvd.