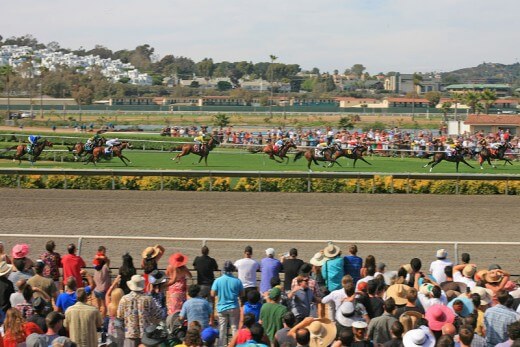 Racing season is back in full swing at the Del Mar Racetrack, and along with it comes a number of big-name artists taking part in the track's Summer Concert Series.

The performances are slated to begin following the final race of the day and will be held at the west end of the grandstand on the Seaside Stage. Much to the delight of concert-goers, admission is free for anyone attending the day's preceding races. Entry to the track ranges from $6 - $10.

For fans entering after the last race of the day, admission to the concerts is $20.

This year's lineup kicked off on July 18th with a well-received energetic performance by Los Angeles-based hip-hop group Jurassic 5.

The other concerts scheduled for the summer series include:

July 25: The Cult – British hard rock band The Cult has been one of the genre's most popular and influential groups for over three decades since first coming into the scene in 1983.

Aug. 1: Neon Trees – Pop-rock group Neon Trees has been a radio-favorite since exploding in popularity following their 2012 hit song “Everybody Talks”.

Aug. 22: Local Showcase featuring Silent Comedy, Transfer, and Vokab Kompany – The August 22nd Local Showcase will feature three different San Diego-based bands that are gaining popularity all throughout Southern California, as well as across the rest of the country.

Aug. 29: Steve Aoki – Grammy award-nominated electro house musician Steve Aoki is one of the genre's most in-demand artists and regularly plays in some of the most popular electronic music venues around the world.

Aug. 31: Reggae Fest featuring Ziggy Marley – The son of the iconic Bob Marley, Ziggy Marley has also established himself as one of the most well-respected reggae musicians of all time with hits like “True To Myself” and “Love Is My Religion”

Most event days consist of 7 – 10 different races, with the first post at 2 p.m. on all days except for Fridays, which feature a 4 p.m. starting time.

The Del Mar Racetrack is located at the Del Mar Fairgrounds at 2260 Jimmy Durante Boulevard. Operated by the Del Mar Thoroughbred Club, the track has had a long and successful history since first opening its gates in the summer of 1937. Today, the site continues to be one of California's most popular racing venues. The 2014 season began on July 17th and will run until closing day on September 3rd.