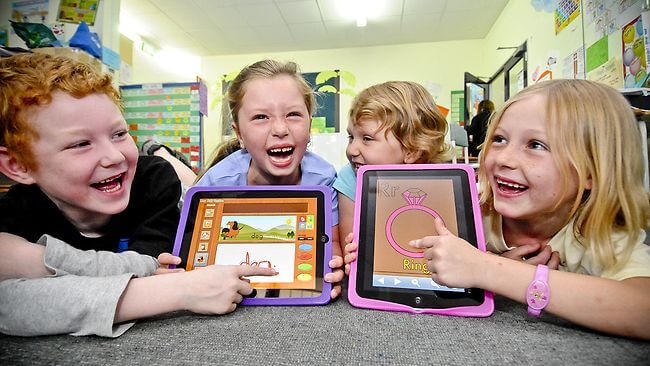 The Encinitas Union School District, a collection of nine schools serving approximately 5,400 students, was recently named as an Apple Distinguished Program for the two year period from 2013-15. This designation is based on the district’s One to One Digital Learning Program, an initiative that promotes learning through the use of technology in the classroom.

Under the One to One Digital Learning Program, each student in the Encinitas Union School District receives their own personal iPad to use for educational purposes throughout the school year. With their devices, students are able to work through a digital curriculum of Math, Language Arts and Science designed in a manner to promote student engagement and encourage a deeper connection between them and the learning process. To further aid in the program’s technology-based style of learning, educators are also provided with Apple’s popular MacBook Pro laptops.

With their iPads, students learn through a comprehensive suite of popular applications, including Keynote, iMovie, Dropbox and Accelerated Reader, as well as dozens of other learning-based and educationally beneficial programs. Following the nationally accepted Common Core State Standards, the EUSD’s use of technology is aiding in its transition from traditional textbooks to the new digital plan-of-study which focuses more accurately on promoting the level of knowledge the Standards specify for students at the end of each grade level.

The Apple Distinguished Program certification recognizes programs, schools and districts which meet or exceed the Cupertino-based technology giant’s rigorous set of criteria for technological usage and digital implementation in the classroom. Requirements include an approach to learning that is personalized for each student, a curriculum that leverages cutting-edge technologies, exemplary leadership and vision by faculty members and school officials, and positive quantifiable results which show the efficacy of learning initiatives.

First established in 1883, the Encinitas Union School District is no stranger to awards and top-notch certifications. Made up of nine kindergarten through sixth grade schools, including a transitional kindergarten program and special education preschool, the district serves the students of Encinitas, Olivenhain, Leucadia and Rancho La Costa. All nine of the schools in the EUSD have been named by the California Department of Education as California Distinguished Schools, while four have been certified as Blue Ribbon Schools by the United States Department of Education.