Residents and visitors in Carlsbad will have a plethora of new activities to do by the end of the year as the city comes nearer to completing the new Alga Norte Community Park, a $40 million project aimed at creating an inviting family destination within the city. The park, located on Alicante Road at Poinsettia Lane, will feature an aqua complex, multiple baseball fields and basketball courts, a dog park, playgrounds, picnic areas and a skate park.

Although the Alga Norte Community Park does not have an official opening date yet, city officials with the Parks and Recreation Department plan to have it open at some point between Christmas and New Years.

The highlight of the new park will be its modern, state-of-the-art aqua complex. The aquatic center will have two pools (a 56-meter competition pool and a 25-yard 12-lane instruction pool), an adult spa, a “spray-ground” area for children to play, locker rooms and restrooms, meeting and classroom areas, and a concession station. Both swimming areas will feature an underwater, energy-efficient LED lighting system, and the 25-yard pool will feature solar heating panels to ensure warm water year-round. The city has a number of plans for the aquatics area, including providing swimming instruction, hosting competitive training and water sports events, allocating time for community open-swim, and sessions for water therapy. 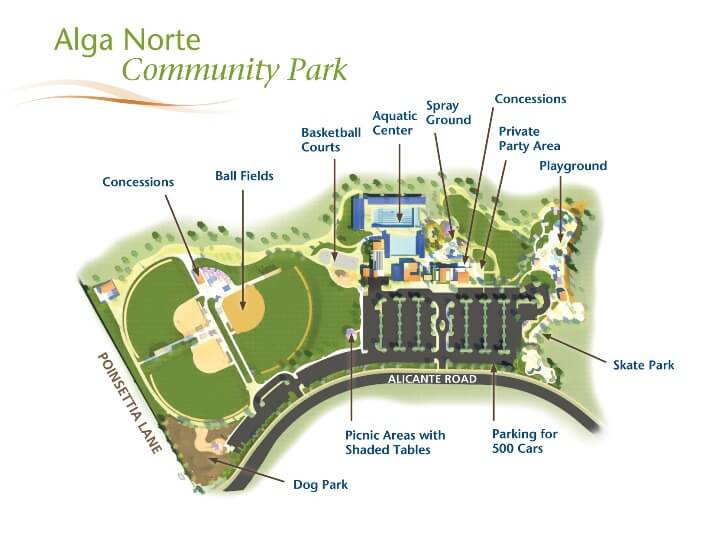 Other major draws to the Alga Norte Community Park will include the multi-area dog park, and the skate park which will be divided into beginning and advanced sections. The dog park area will feature two separate zones – one for smaller dogs and one for those that are larger. Both areas will have obstacle course-style equipment for playing. The planned dog park is estimated to be around three times the size of the city's current Ann D. L'Heureux park.

The new skate park will be larger in size than the community's current public option, the Carlsbad Skate Park, and will feature on-site lighting in order to maximize its useful hours of operation. Along with its spacious street-course section, the skate park at the Alga Norte Community Park will include two separate bowls for skaters of varying skill levels.

Although Carlsbad city officials are unsure of when the park will open, there is a grand opening celebration scheduled for Saturday, January 11th from 10 a.m. until 2 p.m. The official celebration will include the Carlsbad City Council commemorating the Alga Norte Community Park's opening, followed by a dive show and relay, dog agility show, pro skate demonstration, exhibition sports games and a number of other events.

The park's general usage will be free, but in order to cover the costs of standard operation and maintenance, the city will be charging adults a $5 daily usage fee for the aquatic center, while minors will pay just $3. For more information, or with questions about the park, the Carlsbad Parks and Recreation Department can be reached at (760)434-2978 or through carlsbadca.gov.