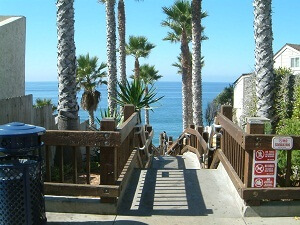 All over San Diego, residents are particularly fond of the ocean. From the warm sandy shoreline to the relaxing crash of breaking waves, the majority of locals love the beach. Most homeowners, however, do not have to worry about their properties washing out to sea. That disastrous scenario is a legitimate concern for those whose homes are located on top of the coastal bluffs. In Leucadia, two homeowners are engaged in a battle with the California Coastal Commission over their right to fortify the land their houses are sitting on through the replacement of their seawall.

Thomas Frick and Barbara Lynch are neighbors alongside of Encinitas' Grandview Beach. These Leucadians have been trying to gain permission to repair their seawall for nearly a decade, but have faced a number of obstacles preventing them from safely securing their properties. The aging and crumbing seawall sustained further damage in 2010 as a result of a strong storm which tormented the coastline.

Pounding waves naturally eat away at the bluffs, relocating sand to ensure the beach remains replenished over time. As the bluffs erode, homes located on top of them can become structurally unsound and face the risk of sliding into the ocean. Having a properly constructed seawall in place reduces this erosion providing protection to residents and their properties.

The main issues brought up against allowing the replacement of this and other seawalls throughout the North County is that they can cause significant damage to public beaches by restricting the natural displacement of sand. Over time, this can lead to a shrinking shore area that negatively affects the coast's enjoyment by the rest of the community. Although the two homeowners involved in the current dispute would be required to contribute $31,500 to offset the expense of artificially replacing the sand restricted by their seawall, experts argue this figure isn't enough to adequately cover costs.

In the middle of 2011, the California Coastal Commission granted the property owners the right to replace their seawall, but only with the attached stipulation of a sunset clause which gave the governing body the right to reevaluate the need for the reinforcing structure in twenty years, and potentially tear it down at that time. For the shore's residents, this compromise isn't satisfactory.

The central argument against the commission's proposed 20-year sunset clause is that it unfairly affects property values and the future ability to sell coastal real estate. At the end of the twenty years, there is no assurance that homeowners will be able to reinforce and secure their properties. Acording to Frick, “If you want to sell, no one will want to buy the property with a 20-year condition.”

After years of paying legal expenses out of pocket, a feat which Frick claims has cost him approximately $175,000 of his own money, the Pacific Legal Foundation has stepped in to aid the homeowners in their fight. In December, the PLF agreed to take the case on pro bono, citing the fact that this dispute could set a harmful precedence for beachfront homeowners all over the state.

Although a Superior Court Judge sided with Frick and Lynch early on in 2013, the California Coastal Commission appealed the decision. Their appeal is slated to go before the courts later on in 2014.