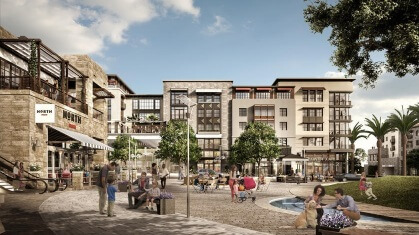 Following months of heated arguments from both sides of the fence, the San Diego City Council voted last week to approve the planned One Paseo development in Carmel Valley. The controversial project, which some area residents say is too dense and will put too much of a strain of local traffic and resources, is slated to add 1.4 million square feet of commercial and residential space to the community.

The project, more than six years in the making, has sparked a plenty of local disagreements. Although there are some residents who have vocally criticized One Paseo for adding too much congestion to an community that doesn't have the infrastructure needed to support the added level of use, many others see the project as a smart growth initiative which will help the city expand without contributing to urban sprawl and in-turn preserving undeveloped land in the area.

Planned for the 23-acre vacant parcel at the corner of El Camino Real and Del Mar Heights Road, One Paseo is anticipated to cost $750 million and create 3,800 jobs in construction throughout the project's development. When complete, One Paseo will provide 608 residential condos, 484,000 square feet of office space, and nearly 200,000 square feet of retail. According to the developers, this is expected to lead to 1,600 new permanent jobs, and more than $150 million added to the local economy each year.

Out of the twenty-three total acres the development will sit on, ten will be dedicated as open space. Kilroy Realty sees One Paseo as much more than just a place to live and work – they envision a lifestyle community that fits the needs and desires of today's young professionals who are seeking affordably-priced housing in an area flush with attractive shopping, dining, and entertainment options.

At the request of the San Diego City Council, One Paseo developer Kilroy Realty agree to commit approximately ten percent of the project's residential units – 60 condos in total – to be available as subsidized low-income housing.

Much of One Paseo's opposition has hinged on the opinion that the surrounding area simply doesn't have the infrastructure in place to support all of the added residents and traffic. It's not just local citizens worried about the impact, either. The cities of Del Mar and Solana Beach have both expressed concern over the project, worried about how the development could strain their roadways and emergency services.

In a move to alleviate some of these concerns, Kilroy Realty has said that they'd be willing to invest millions of dollars into improving nearby streets and traffic management systems.