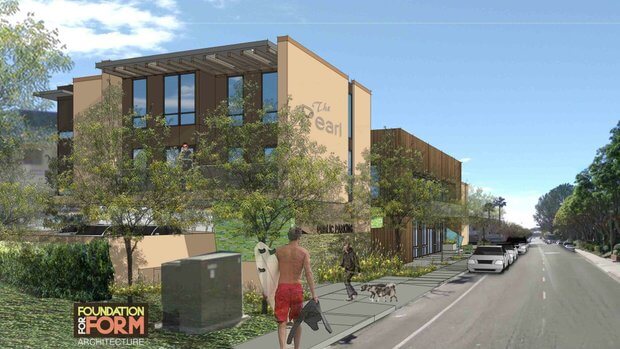 Late last month, the Solana Beach City Council approved an additional $1.4 million loan to the developers of the controversial low-income housing proposal, The Pearl. The planned 10-unit building on South Sierra Avenue has received opposition from local residents and businesses since being announced in 2009.

The loan is Solana Beach's second to developer Hitzke Development Corporation. The first came in 2011 in the amount of $648,000 to help ease the costs of pre development studies, planning and fees. Total expenditures for that portion of the project were estimated to be around $1.1 million.

Located at 555 South Sierra Avenue, the building is designed to provide 10 housing units, commercial office space and 53 parking spaces – 22 more than the site currently offers. Residential units will range from one to four bedrooms in size.

The Pearl's development has seen its fair share of resistance from the community, however. A plethora of local residents, including many living in the Seascape Sur property across the street, have spoken out against the plans. Arguments frequently turn to the added strain on an already busy area, as well as the worry about increased crime.

Despite hearing from multiple concerned Solana Beach citizens at the April 23rd meeting, the City Council unanimously approved the loan. They had some motivation, however - the low-income building will help satisfy a 21-year old legal settlement.

In early 1993, Solana Beach City Council took part in the closing of a 13-unit mobile-home park, evicting many families who had lived in the Section 8 low-income housing site for years. Numerous lawsuits followed, and the city eventually entered into the Perl settlement. Part of the agreement included replacing the thirteen affordable housing units.

Originally, the city was given until 1999 to build new housing. When that didn't happen, they were given an additional year – until the end of 2000. In 2005, the city helped replace 3 of the required units, twelve years after the settlement. Now, Solana Beach hopes to finally construct the remaining residences.

Because of the 1993 agreement, the 10 units will first be offered to the households that were evicted in the mobile-home park's closing. The three units built in 2005 were also first offered to the families, but none ended up applying.

The project's development is expected to total over $6 million dollars, with the city providing nearly one-third of that in the form of long-term loans. The recently $1.4 million loan is set for a term of 55 years at an interest rate of 3%.