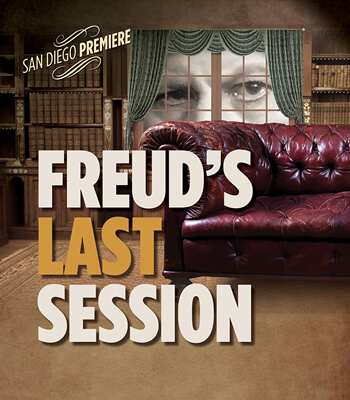 The year is 1939, and tensions are high all over Europe. The entire continent is at the brink of World War II, and England is preparing to go to fight with Germany. But in his London home, famed therapist Sigmund Freud is facing a battle of his own. “Freud's Last Session”, created by playwright Mark St. Germain and first performed in 2009, portrays a fictionalized meeting between the father of psychoanalysis, suffering from mouth cancer and in the final months of his life, and upbeat writer C.S. Lewis.

The North Coast Repertory Theater in Solana Beach will be bringing this interestingly comical encounter to life beginning on October 15th.

At the ripe age of 83, Freud has been a long-time atheist, while the younger Lewis, about to publish his famous book, “The Lion, the Witch, and the Wardrobe”, is a devout Christian, recently converted to the religion from atheism. The differences of their beliefs lead to the pair of great minds to humorous-yet-intriguing conversations on topics like war, sexuality, and whether or not a higher power truly exists.

Previews for “Freud's Last Session” are slated to begin on Wednesday, October 15th, running nightly at 8 P.M. until its official opening night on Saturday, October 18th. Performances will run Wednesdays to Sundays before closing on November 9th.

Tickets for the event range from $37 for showings during the preview period, to $54 for opening night. Other performances range from $41 to $48, depending on the time and day. The North Coast Rep will be offering a $3 discount on tickets for students, senior citizens, and members of the military.

North Coast Repertory Theater is currently in its 33rd season of performances in San Diego's North County. The theater is located at 987 Lomas Santa Fe Drive, Suite D, in Solana Beach. For more information, or to purchase tickets to a performance, you can reach their box office at 858-481-1055, or visit their website at northcoastrep.org.