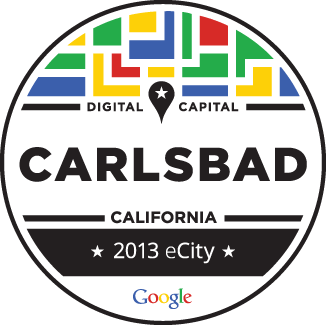 Late last week, Google awarded the city of Carlsbad with its eCity Award for the state of California. The announcement came during Mayor Matt Hall's annual State of the City speech at the Sheraton Carlsbad Resort & Spa. The award, which was given to highlight the strength of Carlsbad's economy and online resourcefulness, came alongside of big growth numbers for the city's finances and economy over the past year.

Google eCity Awards are a way for the company to highlight cities which utilize the internet to successful grow their local economies. Around the country, Google analyze data from around 13,000 different locations in order to select one eCity from each state. The company looked at statistics such as the number of local business with webpages, company use of social media and how many businesses have integrated mobile-friendly web presences.

Carlsbad is California's initial recipient of Google's new, annual award thanks to strong economic growth this year. During his speech, Mayor Hall spoke about a few of the big economic pushes the community has seen this year.

A few of the city's strengths over the past year include:

Although the city's 6.7% increase in property tax revenue may cause some residents to clench onto their wallets, the rise is minimal compared to the gains the Carlsbad real estate market has seen throughout this last year. According to data from the San Diego Association of Realtors, Carlsbad homes for sale saw a median sales price of almost $747,000 in July. This number is a 13.7% increase over July 2012, and makes local property tax increases a bit more palatable. In addition, a significant portion of the city's added property tax revenue came from the growth of commercial properties and businesses.

While Google's recent recognition of Carlsbad is great news for the city, its designation comes as no surprise to many local residents. Locals have noticed firsthand the economic strides made by the city in recent history, and embrace the area's reputation as a technological forerunner. For most people living in Carlsbad, the city's biggest draws include its high quality of life and its friendly sense of community.