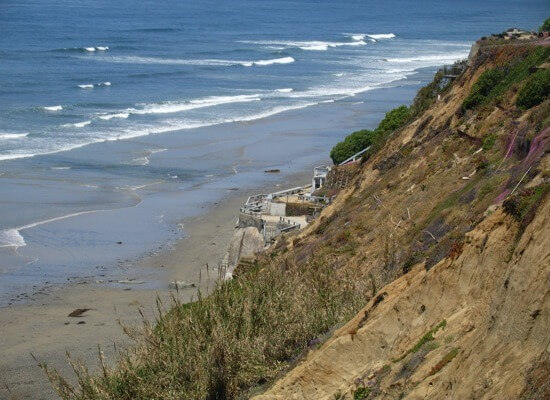 After years of off-and-on negotiations, the City of Encinitas and the Encinitas Unified School District have finally come to an agreement on the fate of the 2.8-acre Pacific View property. Last week, Encinitas Councilman Tony Kranz and the Board President of the EUSD, Marla Strich, announced that the city would be purchasing the former school site for $10 million.

The agreed upon sale price is more than double the $4.3 million offer that the City of Encinitas made for the parcel in late 2013. That bid was turned down by the School District, citing a 2012 offer for $7.5 million. That deal ultimately fell through due to zoning issues. The planned sale also comes nearly four years after the EUSD offered the Pacific View property to the city with an identical $10 million price tag in 2009.

Following the announcement of the deal, the EUSD postponed their auction of the Pacific View property which was planned for the beginning of this week. Until more details of the transaction are worked out, the auction has been rescheduled until May 22. This provides the School District with a backup plan in case Encinitas' offer runs into trouble along the way. The biggest issue facing the City of Encinitas is about how they're going to finance the $10 million purchase.

To mitigate the impact on the city's budget, Encinitas is looking at alternative financing options for the property, including seeking crowdfunding for the deal. Made popular by websites like Kickstarter and Indiegogo, crowdfunding aims to solicit small donations from a large number of individuals and businesses in order to reach financial targets. With the large amount of support in the community for the city's purchase of the Pacific View property, this could be a great opportunity to mitigate some of the impact on the municipality's budget.

The final fate of Pacific View is still up in the air, but the City of Encinitas has stated that it will remain as a public space. Some recent discussions have included turning the aging school into an arts or community center. It will likely still be some time before future plans are set in stone, as the city must allocate or seek out the money needed for any kind of transformation.

At auction, the bidding for the Pacific View property was scheduled to start at $9.5 million. The EUSD had estimated that the final sales price could have reached as high as $14.5 million. The School District has stated that it has no current plans for spending the proceeds from the sale.