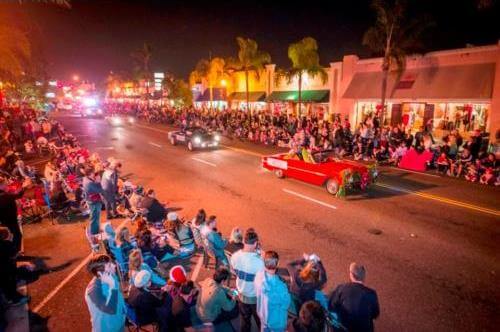 Encinitas will be putting on its 56th annual Holiday Parade on December 7th beginning at 5:30 p.m. The theme for this year's celebration will be “Growing Holiday Cheer” in honor of Encinitas' long history as an agricultural community.

The parade will begin following a 5 p.m. tree-lighting ceremony at the Lumberyard and will proceed along Highway 101 from “D” Street to “J” Street. This year's festive procession will feature nearly a hundred decorated floats with an expected 3,000 children and adults riding and walking alongside.

Executives for this year's Encinitas Holiday Parade recently selected long-time owner of Weidners' Gardens, Evelyn Weidner, to serve as Grand Marshall for the festivities. Evelyn started Weidners' Gardens in 1973, along with her late husband Bob, and has played an integral role in the development of Encinitas' flower scene over the past four decades. Earlier this year, Evelyn sold the gardens to long-term wholesale manager Kalim Owens and head grower Oliver Storm. Even still, she remains a daily fixture at the nursery ready to greet guests and ensure all is well with her prized begonias.

Encinitas has a long history of being a local agricultural powerhouse since the late 19th century. Early crops grown in the area included grains, fruits and lima beans, which local pioneers found grew quite well in the fertile San Dieguito region. Over the years that have passed since, ornamental flowers have taken the throne as one of the region's most popular resources.

The City of Encinitas will be providing free parking shuttles on the day of the parade running from 4 p.m. – 8:30 p.m. from the Scripps Hospital Encinitas located on Santa Fe Drive, as well as from the Magdalena Ecke YMCA parking lot situated at 200 Saxony Road.

For more information about this year's tree-lighting ceremony and Holiday Parade, visit the city's website at encinitasparksandrec.com or call the Parks and Recreation Department's office at (760)633-2760. E-mail inquiries can be sent to nbuck@encinitasca.gov.