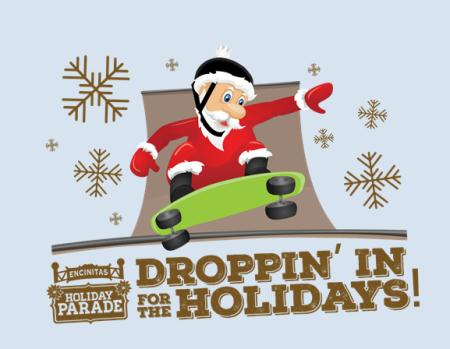 With the holiday season quickly approaching, the city of Encinitas is putting the final touches on the plans for its much-anticipate annual holiday parade. This year's event, with its theme of “Droppin' In for the Holidays” is slated to run on Saturday, December 6th from 5:30 – 7:30 p.m.

“Droppin' In for the Holidays” was chosen for this year's holiday parade in order to acknowledge the city's reputation as an action sports destination. This theme will be showcased throughout the floats and participants in the event, and a number of well-known skateboarders, surfers, snowboarders, and other action athletes are scheduled to make appearances.

The parade will run along Coast Highway 101 from 5:30 – 7:30 p.m. Organizers expect a total of nearly 100 entries to take part in the parade. There is also a tree lighting ceremony scheduled to be held prior to the parade at 5:00 p.m. at Lumberyard Tavern at 967 S. Coast Highway 101.

The Grand Marshalls for this year's holiday parade will be John and Pete Najjar, owners of the Cardiff Seaside Market. The pair founded the popular local market in 1985, and have been operating it together since then. The two brothers were chosen to lead the procession because of their long-standing dedication to the community and service throughout the North County area.

As the parade floats and participants make their ways down Coast Highway 101, judges will be taking a carefully look at each entry. First, second, and third-place awards will be issued in eight different categories, including:

To avoid the hectic parking situation anticipated in downtown Encinitas, city officials and parade organizers are recommending attendees take advantage of the two free shuttle lines that will be in operation for the event. Running from 4:00 – 8:00 p.m., buses will be transporting visitors from the Ecke Sports Park / YMCA parking lot on Saxony Road and Scripps Memorial Hospital Encinitas off of Santa Fe Drive. Both shuttles will drop riders off at the North County Transit District bus station on Vulcan Avenue, just steps from the planned parade route.

For more information about this year's holiday parade, you can call the city at (760)633-2760. You can also find out more details, as well as download an entry packet if you're interested in taking part in the parade, at www.ci.encinitas.ca.us.