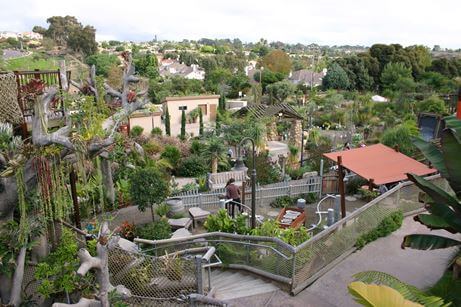 The San Diego Botanic Garden in Encinitas has been issued a lofty challenge for 2014 – raise $3 million in contributions for their planned 9,000-square foot Education and Events Pavilion. If the Botanic Garden is able to meet their fundraising target, the Donald C. & Elizabeth M. Dickinson Foundation has agreed to donate the additional $1 million needed to fund the project.

The new pavilion will serve as an integral part of the established Hamilton Children's Garden, an educational zone which gives children the opportunity to climb through a treehouse, learn about various types of plant life and develop a stronger appreciation for nature.

Drawing much anticipation from Garden members and leadership, the Education and Events Pavilion would be home to an auditorium designed to allow up to 400 people to take part in guest lectures and educational discussions. Currently, the largest indoor space on the 37-acre property can only fit 96 occupants. In addition to the spacious auditorium, the pavilion would also contain multiple classrooms, a fully-equipped kitchen and an amphitheater. The walls and roof of the Main Pavilion will be made out of retractable glass, allowing for the ultimate fusion of indoor and outdoor experiences.

Numerous events, festivals and seminars are held at the Botanic Garden each month, although directors have stated that they feel the number and quality of events they are able to host has been thus far been limited by the shortage of space. Visitors drawn to the Garden's speakers often fill the current space to its capacity, and rental requests for large events are frequently denied. With the new facilities, they anticipate being able to hold more expansive functions, as well as more learning opportunities and even cooking classes.

Built in 2009, the Children's Garden received $60,000 in donations from the Rancho Santa Fe-based Donald C. & Elizabeth M. Dickinson Foundation, as well as another $60,000 in private funds from Martin Dickinson and his wife Carol. Martin Dickinson is manager of the family Foundation while Carol serves on the San Diego Botanic Garden's board of directors. The Botanic Gardens raised a total of $4.5 million for the 2009 expansion.

In addition to this year's fundraising challenge, the San Diego Botanic Garden received another offer at their annual meeting in January – the donation of adjacent land for future expansion. The Ecke Ranch property was purchased in December by the Leichtag Foundation, an Encinitas organization aimed to combating poverty and increasing self-sufficiency in the coastal North County. Foundation President, Jim Farley, announced his group would be willing to donate the extra land if the Botanic Garden could implement long-term planned growth and exhibit financial stability.

The Garden has acknowledged it will likely be years before they're able to occupy the Ecke Ranch property, and are focusing the Education and Events Pavilion before any other plans of expansion.