Runners in Cardiff by the Sea are starting their stretching now for the 3rd annual Cardiff Kook Run with check-in beginning at 7:30 a.m. on February 2nd – Super Bowl Sunday. The run will feature both 5k and 10k races along the scenic Cardiff by the Sea coastline, as well as a costume contest for the most creatively dressed athletes. 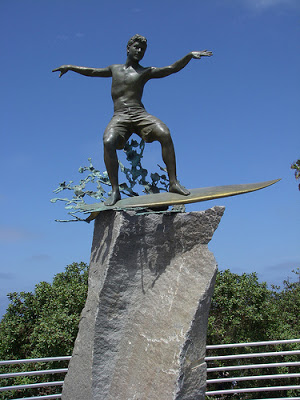 Starting at Moonlight Beach, runners in the 10k will take a path past local surf breaks Swami's and Pipes, by the famous namesake of the race, the Cardiff Kook statue, and down to Cardiff State Beach before turning around and returning back to Moonlight Beach. Participants in the 5k will follow the same path until the 5k turnaround marker located near Pipes.

This year, a costume contest will become part of the festivities with an award ceremony immediately following the end of the race. Judges will make decisions on costumes as the runners pass the finish line, although the length of time spent completing the race will not come into play in the costume contest. Awards will be given to the top three runners whose costumes best represent the spirit of the Cardiff Kook.

The run is promoted as a family-friendly event, with children running and in strollers welcomed to participate. No pets are allowed however, and bikes, rollerblades and similar pieces of equipment are prohibited.

The Cardiff Kook Run was founded in 2012 by two local runners, Steve Lebherz and Seth Brewer. Steve has been running the route of the Cardiff Kook Run for over thirty years as part of his annual Superbowl Sunday routine. Going for an early run before The Big Game is a helpful way to alleviate some of the guilt and partially mitigate some of the unhealthy aspects associated with eating all of the junk food traditionally consumed while watching football later on. Brewer, Lebherz's son-in-law, supported the idea of the run, and encouraged that it become a community-wide event.

Registration for the 10k race costs $49, while entrance into the 5k is $39. For more information, or to register, visit cardiffkookrun.com