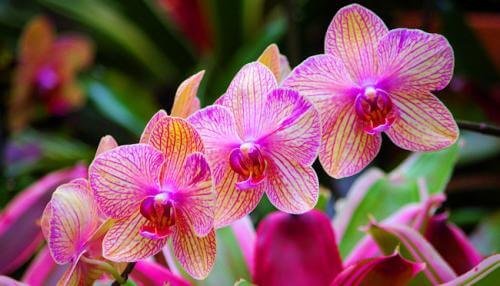 October is slated to get off to a colorful start at the San Diego Botanic Garden in Encinitas. Scheduled for October 4th and 5th, the 2014 San Diego International Orchid Fair will celebrate one of the world's most popular flowers with exhibits, vendors, and lectures from an array of botanical experts.

The event, one of the San Diego Botanic Garden's most popular, will run from Saturday, October 4th to Sunday, October 5th, and feature a nearly countless assortment of different orchid varieties. Visitors will be able to find out more about orchids and how to care for them, view beautifully designed exhibits, and purchase a wide range of different types and colors of the flowers. Entry to the event is free with paid admission to the Botanic Garden. Members of the Garden, as well as of the American Orchid Society, receive free entry to the grounds.

Orchids make up one of the largest and most widespread families of flowering plants, Orchidaceae. They're a favorite among enthusiasts all due to their diverse colors and beautiful appearance. Orchids are native to non-arid climates all throughout the world, although many of today's most popular varieties have origins in Asia and Australia. There are currently just fewer than 22,000 different species of orchids that have been identified.

Originally part of the estate of Ruth Baird Larabee, what is currently known as the San Diego Botanic Garden was donated by Mrs. Larabee to the County of San Diego in 1957. In 1961, the Quail Botanical Gardens Foundation was established, which adapted its current name in 2009. The Garden aims to inspire people, regardless of age, to develop a closer bond with plants and nature.

The Botanic Garden is currently in the process of trying to raise funding for a new 9,000-square-foot Education and Events Pavilion. Recently, San Diego County Supervisor Dave Roberts announced that the County would be willing to donate up to $2 million towards the project. Those funds come with the condition that the City of Encinitas, who currently owns the property set to house the pavilion, would be willing to transfer ownership of the parcel to the County of San Diego. County officials claim that they are restricted from investing public funds into land that they do not own. Encinitas leaders are currently assessing their different options for preserving the property to ensure a promising future for the Garden.

The San Diego Botanic Garden is located at 230 Quail Gardens Drive in Encinitas. To find out more information about the San Diego International Orchid Fair, visit the Garden's website at www.sdbgarden.org/orchid.htm, or give them a call at 760-436-3036.