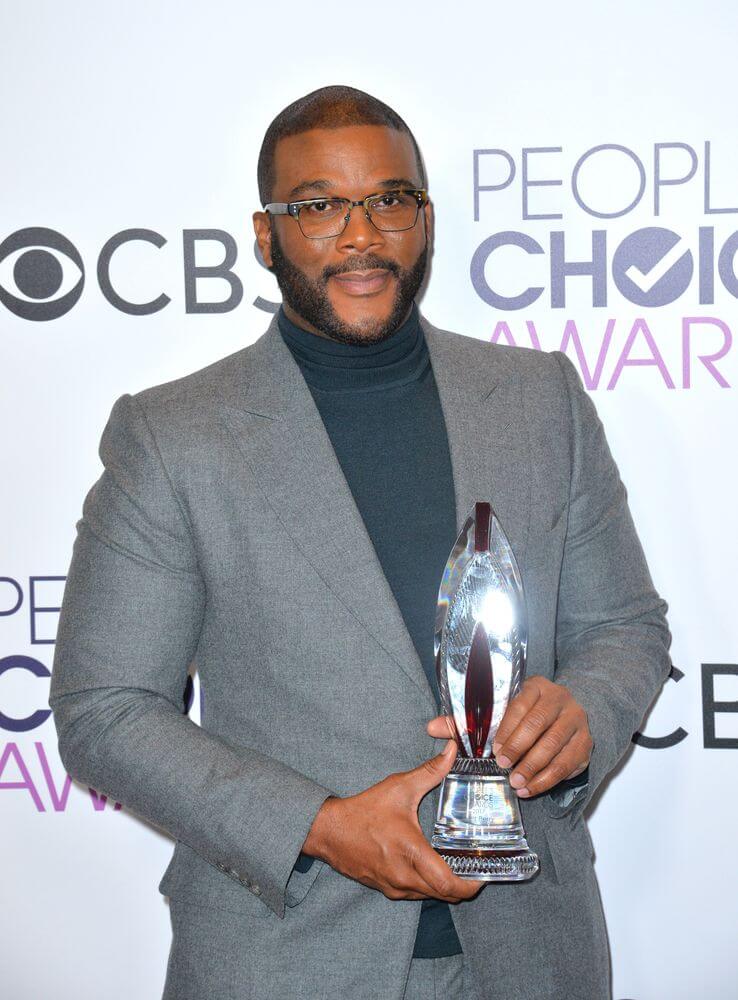 Step 1: Be Tyler Perry.
Step 2: Buy this gorgeous Mulholland Estates home, perform a minor flip and put it back up for sale six months later.
That’s right. Perry’s newest home for sale is back on the market after only six months in his possession, a move experts say proves the purchase was an investment scheme from the start. We can’t blame the guy for wanting to up his bank account (don’t we all?), and we certainly can’t blame him for the gorgeous design scheme he chose.

If your first thought when you look at the front of this 17,245-square-foot home was, “What multibillion-dollar tech company is housed here?” we’re with you. The front is glassed in with huge, light-giving panes, the perfect backdrop for the modern sculpture that adorns the driveway and the hard, Frank Lloyd Wright-esque angles of the home.

Beds of greenery and flowering trees soften the effect, however, especially in these springtime photos. And while blunt lines are definitely the defining factor, the home flows in an interestingly organic way, reducing some of the harshness that would otherwise result from the severe architecture. Lit up at night, the result is an even gentler, moodier impression.

The inside of the home only reinforces the slightly office-y design scheme. A table-packed hangout area mimics the modern, cozy flow of a restaurant or an airplane lounge (you know, the exclusive kind), while a suspended staircase with an interesting carpet wraparound on each step kicks the uniqueness up a notch. Did we mention the stream and koi pond?

The living room is fit to die for, its large, white-ceilinged expanse coming to a point right at the apex of a killer view. The windows showcase not only the San Fernando Valley in all its glory, but also the patios onto which glass doors lead. We can just imagine the glasses of champagne that have been sipped on those balconies.

The dining room, every bit as modern, is a bit scary – mostly due to the giant crystals suspended over the table. While we admire the effect, it might not be worth the fear that an accident was going to ruin the soup course at any moment. With wraparound views, bright woods and expansive sideboards, though, it looks like a pretty epic entertainment space.

Despite its gallery-like exterior, the home is cozy in its own way. The den is proof enough of this, with a flatscreen TV of incalculable size (uh … 10 feet maybe?) as well as a billiards table and suspended statement lamps. It boasts only one of the home’s five fireplaces.

Speaking of multiples, the property has a full 10 bedrooms and 11 bathrooms, providing plenty of space in which his guests can crash after an epic party on the home’s 4.25 acres.

In addition to lit tennis courts, the grounds include a pool, a spa, a waterslide and a grotto for cozy meetups or late-night festivities. The backyard is an inviting space, with far fewer of those hard lines that characterize the front of the home. Surrounded by and interspersed with low trees and shrubs, stacked rocks and comfortable chairs, the area flows naturally from one area to the next. That’s thanks largely to the clear walkways, lush lawn and natural-looking paver stones that bedeck most of the walking space. Outdoor lighting does the rest of the job nicely.

So would we buy it if we could? Maybe. But pictures of the beds and baths are in short supply, while the living room looks like the opening scene of a James Bond movie – and we all know something bad always happens in the opening scene. Overall, this one may be a mix of wish-I-had-it and am-a-little-terrified-of-it, but that’s up to you.