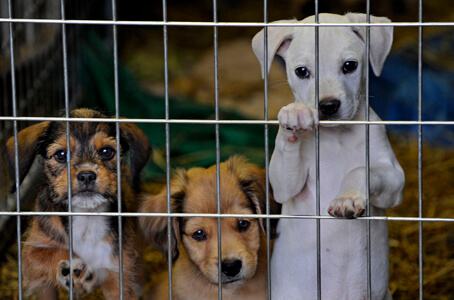 A new law in Carlsbad reaffirms that this pet-friendly city is a great for pet lovers to live through their decision to discourage inhumane pet breeding operations.

Earlier this month, the Carlsbad City Council voted 3-1 in favor of a proposed ban aimed at putting “puppy mills” out of business. The new ban restricts pet stores from selling both dogs and cats, animals that many times are bred in less-than-optimal conditions in puppy mills across the country. By enacting this ban, city leaders are hoping pet adoption rates will rise, while opponents argue that it is unfairly hurting reputable businesses and breeders, and should instead be focusing on cracking down on breeder regulations and accountability.

Following the lead of the City of San Diego, who enacted a similar ban a few months ago, as well as that of numerous cities all over the United States, Carlsbad's decision came much to the pleasure of pet lovers and advocates within city. With the large number of animals being housed and euthanized in area shelters each year, those in favor of the ban argue it will save the lives of many local animals that would otherwise be put to sleep. At the same time, the new law would also slow the influx of animals coming into the city from other regions, adding to the local pet overpopulation. According to animal rights advocates, the majority of pets sold in pet stores come from large commercial puppy mills in the Midwest, including Hunte Corporation, the biggest breeder of pets in the world based in Missouri.

Many of those who oppose the ban, including Carlsbad Mayer Matt Hall, support the purpose behind the law, but don't feel as if the ban itself is the right way to fix the problem. Hall, who was the only “no” vote on the ban, feels that focus should be on enacting federal regulations on breeders and monitoring accountability to ensure healthy conditions for all animals. Instead, the ban is argued to hurt the sole pet store in Carlsbad, California Pets, as well as local citizens who are respectable breeders. The American Kennel Club, an organization which promotes responsible breeding practices, actively lobbied against Carlsbad's ban.

Temporarily, the City Council has adopted a plan to exempt California Pets from the ban while preventing new pet stores from opening. The city plans to investigate the situation further to determine whether you not to permanently grandfather-in the local pet store, allowing it to remain exempt from the new ban. This decision has faced criticism from advocates of the ban, citing that no other city passing similar laws have allowed exceptions for existing businesses.