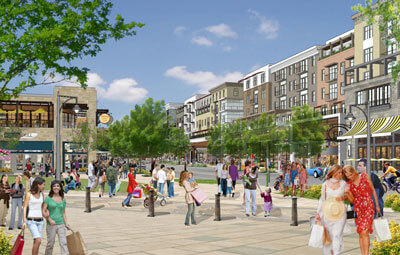 Six years in the making, One Paseo is poised to deliver 1.5 million square feet of office, retail, and residential space to the Carmel Valley real estate market. But Kilroy Realty's planned mixed-use project won't be moving ahead without harsh criticism from detractors who claim the development will cause traffic issues and will be an eyesore on the peaceful Carmel Valley landscape.

Hundreds of area residents and business owners poured into the August 28 Carmel Valley Community Planning Board meeting at Canyon Crest Academy, with all four-hundred seats filled and many more people sitting in the aisles and standing in the back of the room. Board members heard passionate testimony from both sides of the argument, and are expected to decide on a recommendation for the project within the next two weeks.

Slated for the 23-acre vacant property at the intersection of El Camino Real and Del Mar Heights Road, One Paseo's plans include 608 multifamily residential units, 484,000 square feet of office space, and 198,500 square feet of retail shops and storefronts. Kilroy claims this mixed-use development will be a neighborhood village with open spaces, community plazas, and a pedestrian-friendly Main Street.

Detractors see it differently. According to What Price Main Street, a group opposed to the project, One Paseo doesn't fit in with the serene community ambiance of Carmel Valley. They say they towering office buildings and increased traffic around the development will be a blight on the local area, affecting residents who moved to the North County city to escape such an urban atmosphere.

The most common objection from people protesting the project? The fact that its proposed density is three times the 510,000 square feet that present zoning allows. Furthermore, the site is currently only designated for office buildings, not retail or residential developments.

Kilroy Realty has stated that the claims of an increased strain on city roadways are unfounded, and that the group is committed to investing $6 million into local streets and traffic management systems. These improvements will result in a total overhaul of Carmel Valley's network of signals, using advanced modern technology to decrease travel time through the area. They also anticipated the time spent stopped at lights and in traffic to be reduced as well, citing proven results on both Palomar Airport Road and Carlsbad Village Drive after similar systems were installed.

Members of What Price Main Street have asserted that they aren't against development in general, but simply oppose a project of this magnitude. They're hoping that Kilroy will scale back plans for the development to be more in line with current zoning limits.

The San Diego City Council is expected to consider all recommendations and arguments and making a final decision on the project's fate by November. If approved, Kilroy anticipates beginning construction within a few months of the Council's vote.