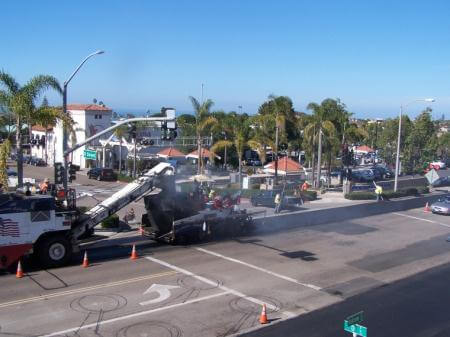 There's no doubt that many residents who drive down Encinitas' streets as part of their daily commute know nearly every single bump and crack of the roads by heart. Luckily though, thanks to the city's new resurfacing plans, that's all about to change. It looks like it may be a smooth ride from here on out.

Monday marked the kick-off of the city's efforts to upgrade a number of local roadways which have declined in condition over the past few years and plagued drivers with bumpy travel. The first phase of these improvements began with work on both Leucadia Boulevard from Saxony Drive to Piraeus Streets, and El Camino Real from Via Montero to Mountain Vista Drive. These two major thoroughfares were chosen because of their high levels of traffic and importance to city residents and businesses.

The repaving project aims to upgrade the quality of these local arteries by scraping off the top five inches of pavement and resurfacing the roads with a slurry seal – a durable mixture of asphalt, water, and filler materials.

Work on these two projects is scheduled to last until mid-October and will be performed mainly between the hours of 9 p.m. and 6 a.m. in order to minimize the impact of construction on local drivers.

These two sections of road are only the first part of the city's two-phase plan. The second set of upgrades is slated to begin next month and will focus on a number of residential streets in the city.

Phase Two of the roadway repairs will include: