After years of opposing the construction of a new coastal power plant, the Carlsbad City Council voted on January 14th to approve a deal between the city, NRG Energy and San Diego Gas & Electric to construct a new gas-powered facility. This new plant is slated to replace the six-decade old Encina Power Station, despite both the City Council and local environmental groups having campaigned to use the Encina space for recreational and commercial purposes once the aging station is eventually decommissioned.

Over the past few years, city leaders in Carlsbad have faced numerous legal battles while trying to prevent another power plant from being built upon the Encina site. Council members reportedly began to consider possible compromises following the unexpected closure last June of the San Onofre Nuclear Generating Station, a facility which provided much of the power used throughout the area. Alongside of San Diego Gas & Electric, the City Council agreed on the planned new construction proposed by NRG Energy, the operator of the Encina Power Station. 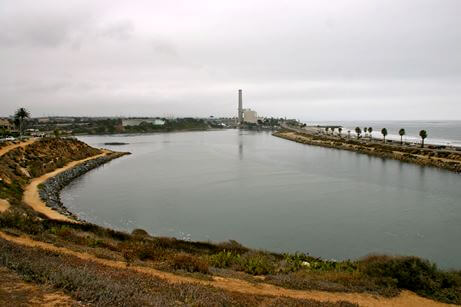 Under the agreed plan, the current power station, complete with its 400-foot tall cooling tower, will be taken out of use and torn down when the new facility opens in 2017. The new structure, referred to as a “peaker” plant, will be less than 25% of the current cooling tower's height, with a planned capped of around 90 feet. The news of this less-obtrusive station came to the delight of many area residents who feel that the Encina Power Station is an eyesore along both the coastline and the western end of Agua Hedionda Lagoon.

According to John Chillemi, the West Region President for NRG Energy, during his slideshow presentation to the City Council, the company's new proposed facility at the Encina site will cause less pollution, make less noise during operations and will replace the usage of sea water with reclaimed sewer water for cooling purposes.

In addition to the aesthetic and environmental benefits to the area, the City of Carlsbad will receive 60 acres of the current power plant's site, as well as another 16 acres within the next ten years on Cannon Road where the North Coast Service Center operated by San Diego Gas & Energy presently sits.

If SDG&E is not able to find somewhere to relocate its service center, is has agreed to pay the city approximately $10 million in damages. Also, NRG Energy has agreed to fork over between $3.6 million and $12 million per year that the Encina Power Station remains in operation beginning in 2018, encouraging the energy giant to adhere to the agreed upon construction and decommission schedule.