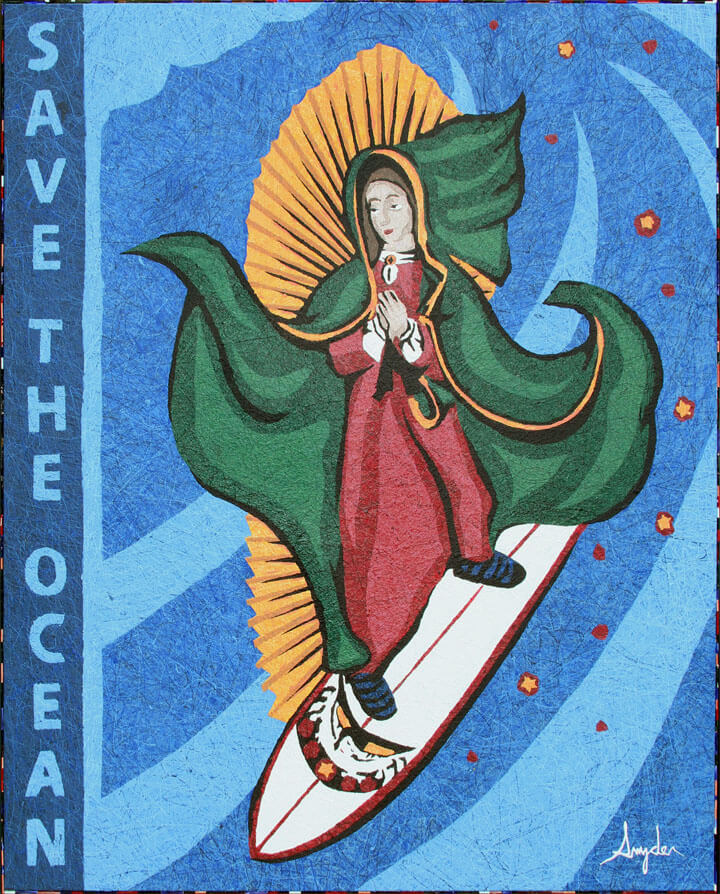 Encinitas is getting involved with the Surfing Madonna again, but this time there are no troubles on the horizon. At last week's meeting, the Encinitas City Council unanimously approved a plan to combine the city's annual Moonlight Beach Fest with this year's Surfing Madonna “Save the Oceans” 5K & 10K Run.

The events are planned for October 25th and will be held at Moonlight Beach, with the run taking place along the nearby streets.

This year's run will be the second annual for the Surfing Madonna Foundation, with the inaugural 2013 running being held on October 12th. That event drew more than 1,500 participants. From the day's proceeds, $40,000 was donated between college scholarships and Encinitas rec programs. This year, Foundation leaders have pledged to donate 25% of the proceeds to fund recreation initiatives throughout the city.

Originally displayed in 2011, the Surfing Madonna became an instant hit as fans traveled from all over the area to view it and take photographs. The cause for all of the curiosity? The colorful 10' x 10' mosaic, which depicts the Virgin of Guadalupe surfing with the caption “Save the Ocean”, suddenly appeared one day attached to a public railway bridge.

Controversy followed as the City of Encinitas deemed the piece as graffiti since the anonymous artist had failed to obtain official permission to display it. City leaders also felt that the artwork portrayed religious media/blogs that shouldn't be displayed on publicly-owned property.

They decided to take down the Surfing Madonna, but out of respect for the craftsmanship and popularity it was receiving wanted to do so without causing damage. Art experts were brought in to assess how to best move it, and research was conducted to find the mysterious artist. Finally, local resident Mark Patterson stepped forward as the piece's creator and agreed to have the mosaic removed.

Today, the Surfing Madonna mosaic is displayed for everyone to see, right across the street from where it was originally hung. It's now on an Encinitas Boulevard wall, on private property, next to the Leucadia Pizzeria.

On top of the October 25th race, the Moonlight Beach Fest will also feature a volleyball tournament, live music, sand sculpture displays and children's events. More details of the 2014 Moonlight Beach Fest and Surfing Madonna 5K/10K Run will be announced as plans are finalized.